Kenya is located in Eastern Africa, bordering the Indian Ocean, between Tanzania and Somalia. It covers an area about twice the size of Nevada. Kenya has a tropical climate along the coast, turning increasingly arid farther inland. Low plains rise into central highlands bisected by the Great Rift Valley, with a fertile plateau in the west. Natural resources include gold, limestone, soda ash, salt barites, fluorspar, garnets, wildlife, hydropower, and rubies . Over 31 million people live in Kenya. Both English and Swahili are official languages of Kenya, while numerous indigenous languages are spoken as well. Ethnically, Kenya is comprised primarily of Africans (99%) including the following groups: Kikuyu (22%) Luhya (14%) Luo (13%) Kalenjin (12%) and Kamba (11%). The country's religious groups include Protestant (38%) Roman Catholic (28%) indigenous beliefs (8%) and others. 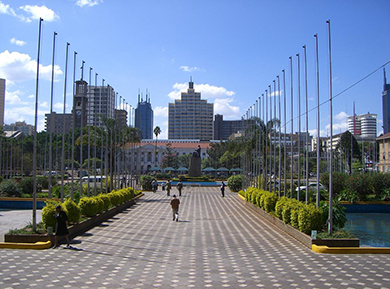 Kenya maintains relations with various countries around the world. Its closest ties are with its fellow Swahili-speaking neighbors in the African Great Lakes region. Relations with Uganda and Tanzania are generally strong, as the three nations work toward economic and social integration through common membership in the East African Community. Kenya's relations with other states vary. The government of Ethiopia established political links in the colonial period with Kenya's then British administration, and today it is one of several national bodies with a diplomatic presence in Nairobi. Relations with Somalia have historically been tense, although there has been some military co-ordination against insurgents. Elsewhere, the Kenyan government has political ties with China, India, Russia and Brazil. It also maintains relations with Western countries, particularly the United Kingdom, although political and economic instabilities are often blamed on Western activities (e.g. colonialism, paternalistic engagement and post-colonial resource exploitation).

Kenya has performed well in the past decade in terms economic growth, mainly driven by the services sector, both traditional and modern. Expansion in services such as financial intermediation and mobile communications has stimulated demand for other services such as trade. Maximizing the potential of services can continue to spur economic growth, especially given that most formal, high quality jobs are in this sector.